​The majestic African elephant and the colorful toucan highlight the warmth and beauty of the animal kingdom while promoting awareness of endangered species, the perils they face, and the realities of habitat destruction, pollution and the shrinking of rain forests. This inspirational display, to be built by Fiesta Parade Floats, encourages everyone that if we believe it, we can achieve the dream of providing protection and safety to animals and the places they call home.

Torrance High School senior Melany Perez's design was selected for this year's float. Here is her essay about her design concept:

"I wanted to go with a theme of endangered animals to show the audience species that are at risk of being extinct.

I was recently working on a project at school where I had to research an endangered species and create a presentation to show to the class. And as I was researching, there were many animals that I didn’t know were going instinct, for example, black-footed ferrets. However, there were some such as the African elephant that majority of students knew were going to extinction in consideration of choosing which animals to put on my design was to incorporate the well-known and the unknown species of animals that are instinct.

I first thought that those that were unknown should be the main attribute of my float. However, those that are well known, such as the African Elephant are an issue that needs further awareness. And I was considering with the well-known animals that are on the float would help promote awareness of other animals such as black-footed ferrets, pangolins, and the Lear’s Macaw. Within my design, I wanted to convey the warmth hand beauty of nature by having a black panther and a leopard snuggling each other and the majesties of the African Elephant. I also incorporated a tree to showcase the endangered bird species. I wanted the tree to extend widely so the audience who are watching can see the birds and other small critters that are in the tree. I wanted the tree to act as a haven for the birds and show how beautiful the home of the animals. I also wanted to express awareness of endangered animals but also to show the habitats that they belong to and their symbolic relationships that create such an amazing abode of the animal kingdom. The incorporation of the body of water that is at the front also adds an effect to the bottom of the cliff and show the homes of other endangered species. I also wanted to incorporate pieces of plants such as grasses, mosses, and ferns to show a natural effect. Within my designs are some flowers such as a baby’s breath that I saw as a magical component that blends in with nature." 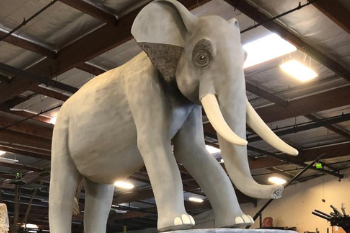 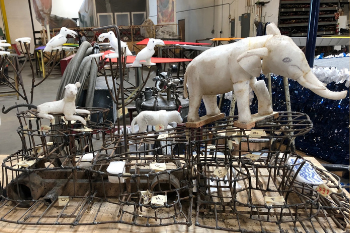 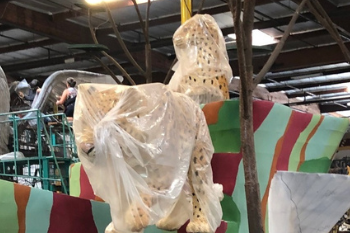